Colin Sach of the Bakers Livery Company and Chris Hockley from the RAFTRC hand over cheque for £7075 to AVM David Murray controller of the RAFBF and receive the prestigious award for “Outstanding Support from an organisation”. 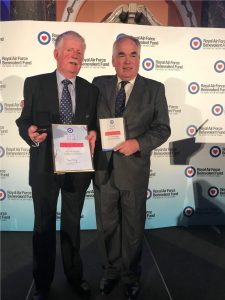 5th Liveries day in 2018 raises more money for the RAFBF

The RAF Target Rifle Club and the Bakers Livery Company recently won the prestigious award for “Outstanding Support from an organisation” at the RAF Benevolent Fund annual awards event on 7th June 2018.

Colin Sach from the Bakers Livery Company and Chris Hockley  from the RAFTRC said they were delighted that the annual Livery shooting competition at Bisley had been recognised in this way.

Chris said his coaches were delighted to support the Benevolent Fund and give something back to the wider RAF family and the great work that the RAFBF did.

The 5th annual event was held this year with well over £35K being donated since the competition was started by Colin and Chris.

The day was now firmly set in the Livery calendar with the 31st May 2019 already earmarked. It could not happen without the enthusiastic support from the coaches and the support of Livery Company members from 16 Livery Companies.