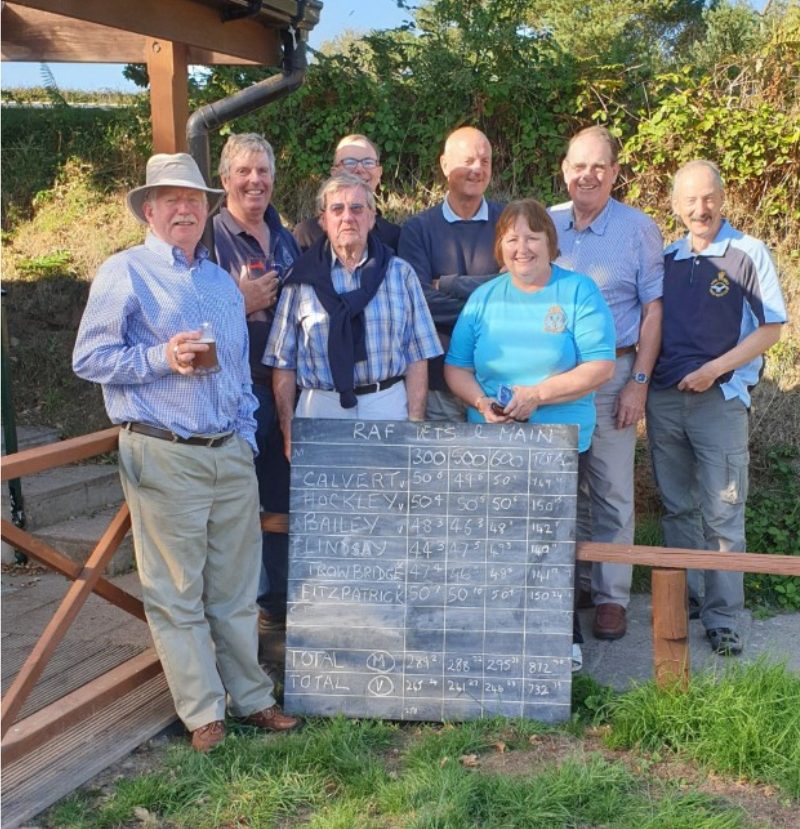 The Main Party departed on Fri 13th on Condor’s ferry from Poole to St Hellier via Guernsey with 4 of the Team sat in prime reclining seats at the front of the ferry with panoramic views across a smooth ocean. Fortunately, there was no bad luck associated with the crossing – that was to come later.

Once the rifles were stored in the JRA Armoury the Team made its way to the Norfolk Hotel in St Helier. The Reception at the Norfolk, however, denied any knowledge of the Team’s booking or its requirement for dinner in the hotel’s restaurant.

Following some 10 minutes of frantic searching, it transpired that we were booked into the Norfolk Lodge Hotel which was located in a different area of St Helier. The team made a quick transfer to the correct hotel and dinner with 2 minutes to spare.
Needless to say, we were the last to leave the restaurant adequately fed, watered and content.

The weather over the weekend was absolutely perfect with brilliant sunshine, clear blue skies and a gentle warm breeze. The Saturday was allocated as free time to sample the culture on offer on the island of Jersey and in the evening there was a team dinner in a fine restaurant on the West Coast offering fine food and wine at a reasonable price and the bonus of glorious sunset.

The the team assembled for breakfast on Sunday morning and it was apparent that the good weather would continue for the shoot at Crabbe Range. When everyone arrived by the allocated time of 0900 the electronic targets were all set up, tested, working and ready for use.

Jersey’s electronic targets require shooters to bring their own monitoring device which can be an i-pad, i-phone, android phone or tablet. Advice was given on how to log in and all the team were allocated targets shared with JRA’s shooters for an individual prize shoot.

Lunch in the JRA Clubhouse was everything a shooter could desire and cooked to order by volunteer supporters and shooters.

In the afternoon the wind had picked up slightly and moved a little more to the right. The course of fire was the same as a Queens II i.e. 2 sighters and 10 to count at 300yds, 500yds and 600yds.

When the match started, the RAFTRC learned a lesson on complacency but fortunately the shooter, who had set up at 300yds thinking he was shooting at 500yds, was being coached by David Calvert who, after the first sighter, diagnosed a serious sight setting error that could not be corrected on the point and sent the shooter off the point to get his sights properly checked.  He return at the end to continue his shoot and fortunately with one sighter still remaining, produced a respectable score. One of the golden rules of team shooting – Always get your rifle sights checked independently before shooting.

In spite of this nervous incident, the RAFTRC came away at the end of 300yds with a good 6 point lead in the Main Match and 8 point lead in the Veteran’s Match with Chris Fitzpatrick, Chris Hockley and David Calvert all scoring possibles.

This spurred Jersey to step up a gear at 500yds and in spite of Chris Fitzpatrick and Chris Hockley scoring 50s again, Jersey clawed back 3 points in the Main Match and 3 points in the Veteran’s Match.

At the start of 600yds, the Matches were finely balanced but it was the turn of the RAFTRC to step up a gear and every shooter equalled or improved on their previous range scores with Chris Fitzpatrick, Chris Hockley and David Calvert shooting possibles once again, enabling the RAFTRC to extended their lead by a further 4 points in the Main Match and 2 points in the Veteran’s Match.

Chris Fitzpatrick and Chris Hockley both finished with 150s as did Richard Benest from the JRA. The final results were victories for the RAFTRC in both the Main and Veteran’s Matches with Chris Fitzpatrick the top shot with 150 and 24 V-Bulls. Jersey’s Victoria College shot alongside and were just a couple of points per shooter behind.

Jersey RC fielded a new shooter in their team, Alex Le Quesnein who is just 14 years of age and the son of the son of Kate and Dave Le Quesne.  Alex shot a fine 140 with 10 V-Bulls and looks certain to follow his parents to shooting fame. The future pool of shooters for Jersey is looking good.

Before the celebrations started, the Team’s Manager, Karen, had a nasty fall carrying the scoreboard down the steep steps that lead off the 600yd firing point. In spite of the swelling and pain, Karen put on a brave face and insisted on performing her duties as Manager and Captain of the Main Team at the formal reception dinner that evening.

At the reception JRA’s Captain, Nick Atkins, handed over the Les Charrieres Cup for the Main Match to Karen and Cliff Mallett, JRA Veteran’s Captain, handed over the Double Trigger Trophy to Jim Bryant. The formal reception was yet another opportunity for all shooters, partners and friends to unite and enjoy more fine food and wine at a private room in the restaurant of Les Ormes Golf Club. 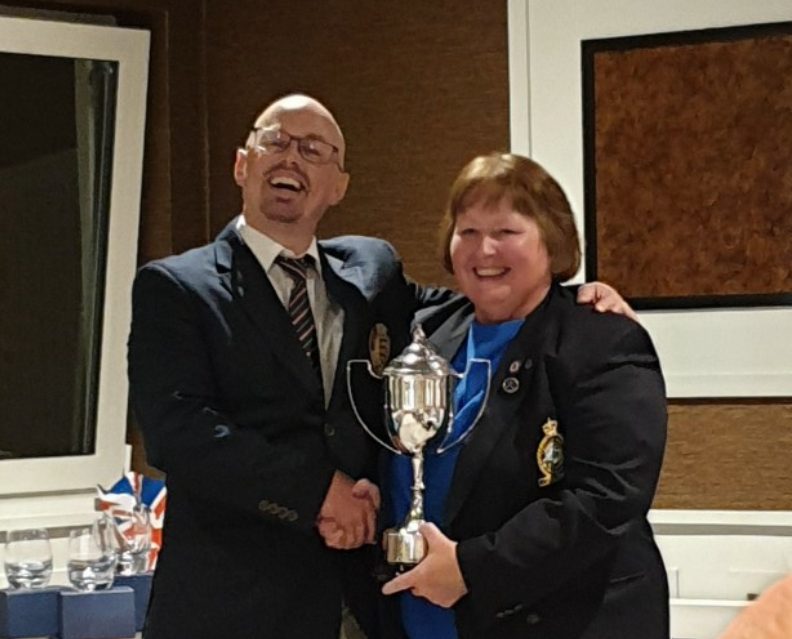 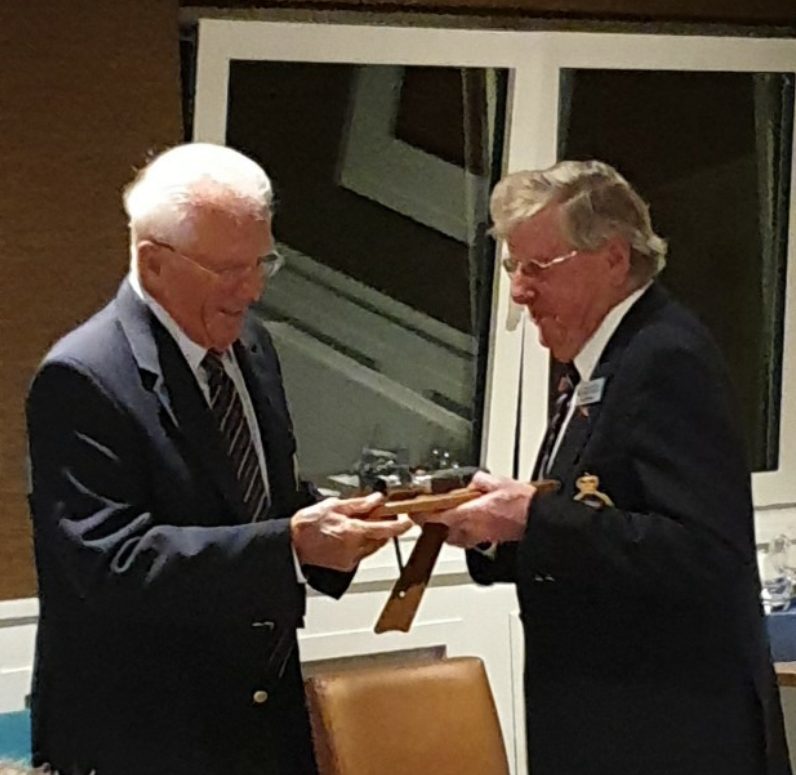 After checking out of the hotel on Monday, there was time to sample more of Jersey’s culture before returning to the JRA armoury to pick up rifles and head to the ferry for the sailing back to the UK. Because of the tides departure  was later than usual and the ferry didn’t dock in the UK until nearly midnight which meant it was early Monday morning before the Team arrived back at Bisley. However, the sailing back was just as smooth as the one out and everyone agreed it has been one of the best tours they could remember. Indeed the results and weather could not have been better.

David Calvert won the individual shoot, scoring a possible at all distances and willingly donated his prize money to the Tour Team Fund.