RAFTRC Members Back at Bisley! 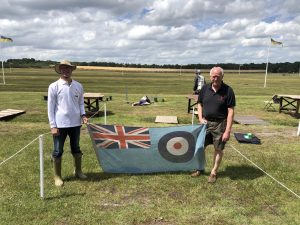 RAFTRC members were back on the ranges on Sunday as the recent guidelines allowing outdoor sport (socially distanced, of course!) took effect. The morning started at 300 yds with several members from the Caribbean tour although the weather was vastly different! Having become accustomed to the sunshine whilst on tour and recently at home during lockdown, it was disappointing to say the least to be greeted with constant drizzle and grey skies! However the drizzle stopped as we disembarked from our cars and we hit the electronic targets. It would be rude for your author to say that it may have been fairly apparent that no one had shot for a while but, well, let’s say that scores got better as we went on…! With competitive shooting not yet possible, accommodation on site still closed and serving personnel needing to do sport off-duty, turn out wasn’t as high as a club weekend but those that made the trip had an enjoyable time seeing old faces and blowing out the cobwebs. The sun shone through for the afternoon shoot at 600 yds. Time was tight though and all agreed that groups of five will probably work best as we go forwards trying to establish a “new normal” for the time being. More shoots are planned for the upcoming months, although it should be stressed that all activity at the moment is organised by individuals and not the club. Plans to reopen RAFSAA are afoot but rely on both the Government guidelines relaxing and RAF Sport agreeing to the mitigations put in place. Hopefully over the next few months we will see more of each other on the ranges as people want to indulge in a little bit of Bisley as well as train for the possible “mini-Imperial” in September!