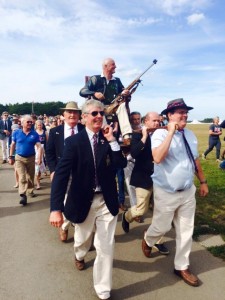 The RAFTRC congratulates Club member Wing Commander David Calvert for winning the HM The Queen's Prize for the second time. David last won the event in 2010 and winning it again in 2015 only helps to cement his status as one of the finest rifle shots in the world. HM The Queen's Prize is one of the (if not the) most prestigious prizes in target rifle shooting and allows the winner to be chaired off the range behind the brass band, carried by his fellow shooters. David even managed to win in quite some style, with a good enough lead to even be victorious with his magpie to finish at 1000 yds! His winning score of 294 and 29 v-bulls was enough to win by one point. The win capped a very successful day for David who had earlier that day won tie shoots for both the St George's competition and the Conan Doyle before going on to represent Ireland as part of the Irish Mackinnon team. A great evening then followed for David and the rest of the team as we chaired him around all the club houses at Bisley, enjoying their hospitality as we went! 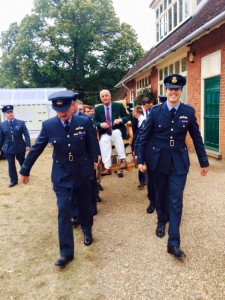 David's success was not the only reason for the RAF Club to be cheerful though! Many other members had done well over the course of the two weeks of shooting.