We recently held our annual newcomers day to help introduce newcomers from the Service into the sport. With the ranges and weather booked we were ready to go and so it was a little disappointing that so many of the potential recruits had to withdraw at the last minute due to Service reasons. This did mean however that those that were still able to make it would get some great one to one instruction and more range time than you can shake a stick at!

The first day consisted of the standard military Powerpoint briefs on everything from marksmanship to the ever important range safety. Although by virtue of being in the forces we are all familiar with the common sense precautions to be taken on a range, the way that Bisley operates can be slightly eye-opening for the uninitiated! The afternoon was the first taster of full-bore target rifle shooting. Despite having never fired these types of rifle before the guys and girls did extremely well.

The second day was all about taking the skills learnt and really refining them without worrying too much about the scores. To that end, we spent the morning actually doing small bore shooting which allows you to really focus on the marksmanship principles without worrying about the effects of the wind. The progress by the end of this was marked and at one stage it was feared that we had actually recruited more into the small bore discipline than the full bore! However, a switch back to .308” in the afternoon and some glorious weather on the range ensured that the choice wouldn’t be too easy. Although the progress appeared to plateau the eagerness to improve amongst the newcomers was palpable. This led to a great third and final day on Century range where groups tightened further, scores continued to rise and the coaches started to worry about their places in the team!

Finally, all those that managed to make it have confirmed that they would like to take up the sport and a couple have even made it to the team pre-Imperial training! This means that despite the initial lack of numbers we have gained as many potential recruits as we have achieved in previous years. I must thank those that attended and tried so hard, including the coaches, without whom the event could not have taken place. 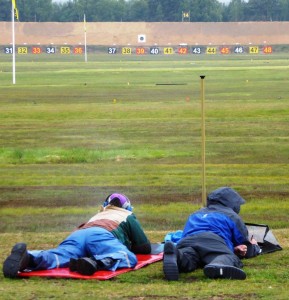