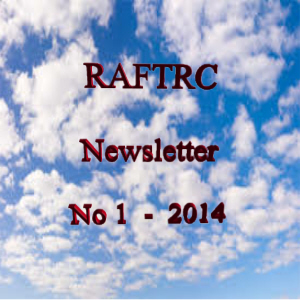 RAFTRC Membership
Club Membership for 2014 is now due for renewal.  This was meant to be the start of on-line renewals but unfortunately the web site developer has been under pressure with his professional exams and is still working on the package. This year’s renewals will there follow that of previous years and the renewal form is attached. The good news is that, yet again, the Club and RAFSAA membership rates remain the same. The bad news is that the NRA is increasing its charge to the Club for every member that is not an Individual Member of the NRA.  That charge is shown on the Form but is only applicable only to those who are not members of the NRA. The Club’s bank details for those paying via e-banking are shown on the form.

Karen, our Match Sec, has been busy putting together this year’s fixtures and these are attached along with their dates. To shoot on a Club Weekend email Karen, karen@bang.eclipse.co.uk , at least a week in advance.

Guest Days for 2014 are looking promising this year and one or two will need a lot of help (13 June for instance where we are looking after 48 guests from the Liveries.  The dates are: 29th and 30thMay, 5th and 6th June, 12th and 13thJune, 2nd and 3rd Oct.  If you have not received the coaches booking request from Chris Hockley and wish to be involved, please contact Chris Hockley on seejay.hockley@virgin.net

You may also be interested in a project being considered. Bill Willott’s pistol is up for sale and has been offered to RAFSAA with the correct provenance. It is of course de-activated but the chap wants silly money! It is thought that similar ones with provenance are selling for £350 and RAFSAA is prepared to contribute something of course (from the Tucker Legacy) but it is thought that the seller will want a lot more and the only thing to do would be to collect donations. If you are willing and without commitment as to how much you would be prepared to donate please let Chris Hockley know on seejay.hockley@virgin.net .  It would be useful to know if there were some backers before entering into negotiation.

The Club’s Team to South Africa have a training session this month. We wish them every success in the SA Championship.